Grown Folks Coffeehouse Building to Be Replaced by 4-Story Structure?

I have not been diligent about combing through all my DPD mails. And I haven't noticed a proposed land use action sign at the site. Anyone know what's up with this?

Looks like there's a city meeting tonight at 6:30 p.m., and the design proposal will be made available then. Anyone plan to go? I may go.

Four stories seems out of scale with the surrounding one-story area -- I certainly hope the plan isn't for four ugly stories.

Design Review, Early Design Guidance Meeting for a four story, 18 unit residential building with 3,700 sq. ft. of retail located at grade. Parking for 15 vehicles to be located within the structure. Existing building to be demolished.

You should go! After all, how many party invitations do you get that advertise both "face painting" and "Superfund cleanup"?

I just noticed a beautiful, thoughtful comment on a post I'd made about a visit to the Comet Lodge Cemetery back in March. 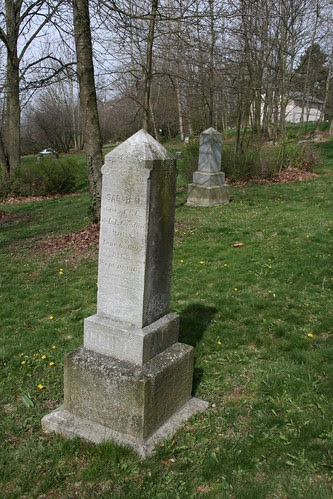 In 1952 my parents bought a house on 23rd and Orcas, one block down from Beacon Ave. At that time the cemetery now known as Comet Lodge, covered a much wider area.

The border of the cemetery is now a Korean Christian church and many houses stand where once there were sunken graves and tombstomes made of wood, carved so long ago they were petrified.

My brother Rick and I played in that cemetery and often ate our meals there. Our lives were hard and our parents were neglectful alcoholics.

We spent every spring, summer and fall in this peaceful and safe place. Every day it seemed to welcome us to play there in the trees and unkept cemetery. We loved it and we both have very happy memories there.

It had been 45 years since I'd been there but always thought of the happiness my brother and I got from being there.

In the spring of this year I was with my daughter and two grandchildren on our way to visit my aging parents who still live on Orcas, and as we went by Comet Lodge, I said "I would love to walk through this place again."

We stopped the car and went into the cemetery, my daughter, my two grandkids and I.
I felt so welcomed and happy to be back in a place that brought me so much comfort and peace and acceptance again.

It was a beautiful warm day and we brought fresh cherries and pennies for offerings to the spirits that dwell there.

I sat under the big tree in the middle of the graveyard and a warm gentle breeze blew acrss my face and it made me smile inside and out. This wonderful feeling had not aged as I had, but remained loving and peaceful as though it had been waiting to see me again, this time with my child and grandchildren. My 7 year old grandson found a deflated ball on the grave of a young boy and played as though he was playing with the spirit of this child.

I just obsereved with deep appreciation, reliving happy memories with my brother. We were there for a long time and what a dear feeling it brought to me and I hope that I left that feeling with "Them" as well.

Don't be afraid because this resting place is for children as well as adults...there is "something special" that watches over children there.

It watched over me and my brother for many years and still watches over the ones who remain there. So, if you go to this place in the future, remember to be respectful and leave offering of some kind (cherries and pennies). This place that has been desecrated and abandoned by the cities is now and always will be SACRED land. When I am only a memory...my ashes will be scattered here in this place that gave me joy as a child and adult.

So when you come here in the future and you see a woman and children playing there, remember that things that frighten some...bring joy and life to others. Respect this sacred place.

Don't Read This If You're Having a Nice Day

Just came across a nasty little Beacon Hill story in the P-I's crime blog. The gist:

After dragging a 14-year-old girl by her hair from Holly Park in south Beacon Hill on June 28, two men "forced the girl into a white Cadillac sedan ... [and] took her to Aurora Avenue North and told her 'to have sex with people for money or she and her family would be killed,' the investigating officer said in a statement."

After a while, the girl escaped. One of the creeps is in jail; the other remains at large.
Posted by JvA at 7:13 AM No comments:

North Beacon HIllers to Be Limited to Two Parking Passes?

The North Beacon Hill parking zone is not mentioned in this excerpt from today's P-I, but it is on the proposed list of the two-passes-per-household neighborhoods.

Faced with more cars than places to park on Seattle streets, the city's Transportation Department is considering restricting the number of residential parking permits people can have.

In the densest areas – the heart of Capitol Hill around Denny Way, First Hill, Lower Queen Anne, the Pike-Pine corridor, and the Cascade neighborhood – households would have to make do with only one permit.

In others – Wallingford, the eastern part of the University District, Eastlake, less dense areas of Capitol Hill, Ravenna and near Lincoln High School – a household would be allowed two permits.