One Example of Text Heaviness in EnVision Math

On Wednesday, 6/4/14, the Seattle Public Schools administration recommended that the Seattle School Board adopt EnVision Math as its sole K-5 math curriculum. Instead, in a 4-to-3 vote, the School Board voted to adopt the district's third-place choice, Math in Focus.

One of the reasons that Southeast Region School Board Director Betty Patu cited for choosing Math in Focus (an American version of the internationally renowned Singapore math system, upon which Common Core math standards were based) was that Math in Focus presents a more visual approach to math lessons. Director Patu asserted that this language-neutral, visual approach would be especially valuable for Southeast schools' many English language learners.

I agree with Director Patu's assessment. Last Monday I spent the evening at McGilvra Elementary, which is already using EnVision math, and I had the opportunity to review 4th and 5th grade math books. I noticed that each lesson contained a "Writing to Explain" section, which require students to write narratives about their math answers. I then did some Internet research to find out more about the scoring rubric for these questions and found a couple of references, including the following.

I encourage you to examine the link above to review the whole lesson, but I'd like to concentrate on the "Writing to Explain" (Exercise 4) question here. It says:

While I am not a mathematician, I'm a college graduate who completed AP Calculus in high school, and I would say that the answer should be "p-2, because that is the difference between the rows, and the missing three figures are $28, $33, and $38." (I would also suggest that this is a ridiculous example, as no retail store would ever keep the dollar amount of a discount constant as customers made larger purchases. They would at least keep the percentage constant, if not give a larger percentage break for larger purchases.)

This question is Exercise 4 and is therefore worth 3 points, as much as the other 3 questions in this section combined:

This part is interesting. The district has touted that EnVision contains ELL support mechanisms. Here is an apparent example of such support. In the end, you will see that this explanation actually has nothing to do with the scoring of this question. I'm unsure what value this tip provides for students in the context of this question and answer:

And finally, the scoring rubric for the question, with sample answers: 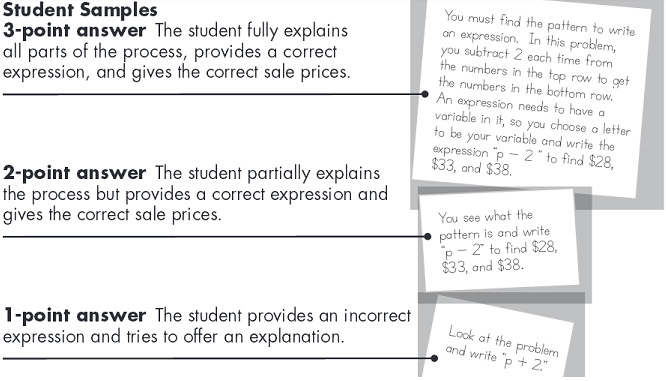 While writing long sentences is a necessary skill, it is one that can and should be covered in language arts, social studies, and science. Our English language learners who may be quite skilled in math should be allowed to flourish in math, and not suffer bad math grades because they aren't yet as proficient in English as their native-speaking peers.
Posted by JvA at 1:01 PM 1 comment: